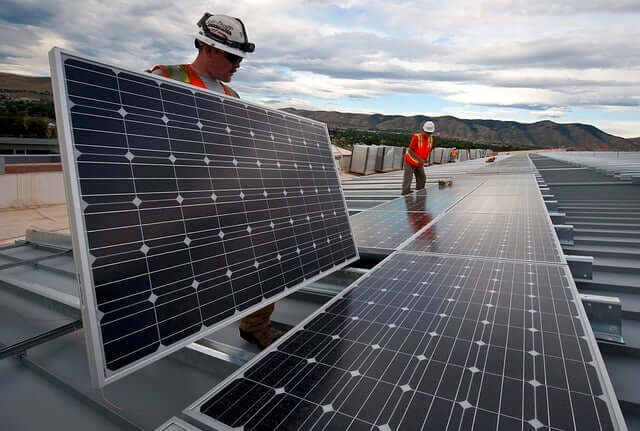 When you hear the phrase ‘solar powered’ your brain might immediately think of those huge solar panels or off the grid power supply. And you’re right on both accounts. Solar energy is used for a variety of things that include providing the power for your HVAC system. Using solar energy is a way to reduce your energy bills with the use of a truly renewable energy source.

The Rise Of Solar Power

There is a growing market for the use of solar power. Using the energy from the sun has been around for centuries. If you ever see a clothesline full of clothes outdoors, they are using solar energy in its natural form to help dry the clothes. In the late 1800s, scientists discovered that light could be converted into electricity. In the 1950s, technology had advanced enough to discover the solar cell that could produce enough electricity to power small devices, although it was too expensive to be mass produced for consumers. In the 1970s, a way to lower the cost of solar cells was discovered. This changed the way solar power was used and paved the path to how we use solar power today.

How To Power A Solar Powered HVAC

The cost of heating and cooling a building is usually a large expense. There are several ways that solar energy can be used to power HVAC systems from solar panels on the tops of buildings that power all electricity to hybrid units that only power the HVAC system. Many homeowners have chosen to invest in solar energy to power their home because of long-term benefits and annual tax breaks due to the fact that solar energy reduces carbon emission.

The use of solar panels on roofs is usually what most people choose when deciding to use solar energy. That is because these panels are put in an area where the most sunlight will reach them, and they do not take up space on ground level. Solar panels allow particles of light to knock electrons free from atoms, generating a flow of electricity. They are composed of many smaller units of linked photovoltaic cells. Solar energy can be used as a direct source of power, or stored in batteries for later use.

How To Calculate Solar Panel Needs

If you want to use solar power to cover the costs of your heating and cooling, you need to first determine how many solar panels you will need. You do this by calculating how much solar energy will be needed. The average home in Texas uses about 9000 kWh (kilowatt hour); this is how energy is measured. The average production ratio in Texas is 1.65 and is based on how much sunlight the area receives. The calculation for how many solar panels are needed is the need in electricity (kWh) divided by the production ratio. So, for an average home in Texas, 5,454 kWh would be needed. Most solar panels produce 250-365 watts per panel, so in this scenario about 15 panels would be needed to cover the heating and cooling.

There are other hybrid units that use solar powered energy for HVAC systems. Some are available off-grid. The upside of your power source being off-grid is that if there is a power outage, your power source will remain on because it isn’t connected to the grid. Off grid-options require batteries or generators that store the solar energy for future use. One option is a mini hybrid unit that only provides power while the sun is shining. This option is not connected to the grid, so it requires batteries. Another hybrid unit that is connected to the grid uses solar energy to reduce the amount of work of the condenser and extends the time that the compressor is cycled off. This uses solar panels that don’t need to be on the roof because they are able to capture solar energy at night. A recent unit that was created is able to power everything 100% with solar energy it is able to get day or night. This is used in smaller spaces and has an adapter for using electricity from the electrical company if needed.

The Future Of Solar Energy

Solar energy is a renewable energy source that could be used to power your HVAC systems completely, or help supplement the costs. Solar panels have an initial investment, but end up paying for themselves in the long run. The use of modern solar energy has been around for decades and the technology is only improving. Interested in learning if a solar powered HVAC might be for you? Contact AirOne Heating and Air Conditioning, a San Marcos HVAC provider, for more information.